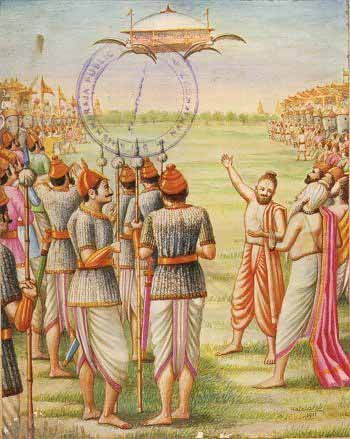 A vimana is a word with several meanings ranging from temple or palace to mythological flying machines described in Sanskrit epics. References to these flying machines are commonplace in ancient Indian texts, even describing their use in warfare. As well as being able to fly within Earth's atmosphere, vimanas were also said to be able to travel into space and travel under water.

Descriptions in the Vedas and later Indian literature detail vimanas of various shapes and sizes:


In the Vedas: the Sun and Indra and several other Vedic deities are transported by flying wheeled chariots pulled by animals, usually horses (but the Vedic god Pusan's chariot is pulled by goats).

The "agnihotra-vimana" with two engines. (Agni means fire in Sanskrit.)

The "gaja-vimana" with more engines. (Gaja means elephant in Sanskrit.)

Other types named after the kingfisher, ibis, and other animals.

The word comes from Sanskrit and seems to be vi-mana = 'apart' or 'having been measured". The word also means a part of a Hindu temple. The meaning of the word likely changed in this sequence:

An area of land measured out and set apart to be used for sacred purposes.
Temple
A god's palace
In the Ramayana: the demon-lord Ravana's flying palace called Pushpaka.
In later Indian writings: other flying vehicles, and sometimes as a poetic word for ordinary ground vehicles.
In some modern Indian languages, the word vimana means ordinary real aircraft.