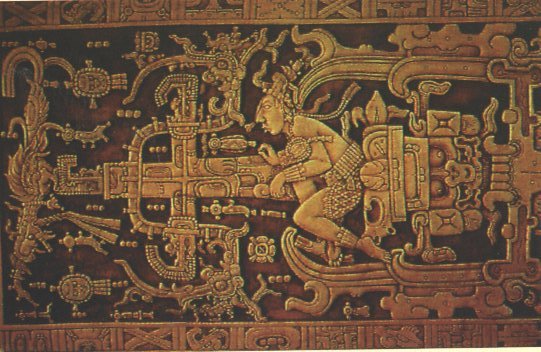 Other intriguing pieces of ancient astronaut “evidence” include the Piri Reis map and the sarcophagus lid of Pakal the Great (the Mayan god-king of Palenque), which supposedly depicts him in an astronaut suit and space capsule. You be the judge:
http://genealogyreligion.net/fourth-kind-encounters-with-ancient-astronauts-the-origin-of-religions 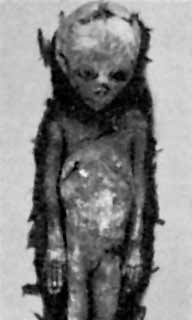 Legend still preserved in the area spoke of small, gaunt, yellow faced men who
'came from the clouds, long, long ago'. The men had huge, bulging heads and puny
bodies and were so ugly and repellent that they were hounded down by local
tribesmen on horseback. Strangely, the description of the 'invaders' tallied
with the skeletons orginally discovered in the caves by Professor Chi Pu Tei.

http://worldmysteries.tv/ Pakal's tomb has been the focus of attention by some "ancient astronaut" enthusiasts since its appearance in Erich von Däniken's 1968 best seller, Chariots of the Gods. Von Däniken reproduced a drawing of the sarcophagus lid (incorrectly labeling it as being from "Copan") and comparing Pacal's pose to that of 1960s Project Mercury astronauts, interpreting drawings underneath him as rockets, and offering it as evidence of a supposed extraterrestrial influence on the ancient Maya.